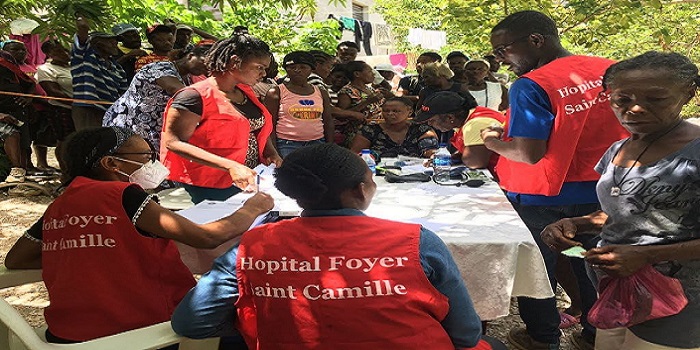 HAITI ONE MONTH AFTER THE EARTHQUAKE: THE INTERVENTION OF THE CAMILLIANS AND CADIS CONTINUES
Sep 17th, 2021
A little more than a month has passed since the disastrous earthquake that shook Haiti on the night of August 14, followed by Cyclone Grace that made operations even more difficult.
Despite the timely intervention of humanitarian organizations and volunteers, still today many communities, such as the departments of Sud, Grand-Anse and Nippes, are isolated, and there is a growing risk of epidemics due to the scarcity of water and the difficulty of transport to reach the most remote areas.
Father Robert Daudier, Director of the Saint Camillus Hospital in Port-au-Prince, tells us of important missions accomplished thanks to the mobilization of Camillians, the Sisters Ministers of the Infirm and a team of more than 20 volunteer healthcare personnel and medical staff, and more than 500 kits were distributed to the most affected places in the South.
Specifically, the first mission was launched in the hardest hit areas of Chardonnière, Lapointe, Presbyterian, Benèche, Portal, Marion, Charlemagne with the distribution of free medicines, blood glucose and health tests, personal hygiene kits, clothes, sheets and about 250 food kits.
Then followed, with the same objectives, the mission at Camp Perrin with the Parish of Saint Anne, which assisted 150 people in the areas of Tibi, Chanploi, Anba Kan, Brouette, Bananier, Rhe, Laporte, Carreau.
Finally, two other particularly needy places, a small area called Boisrond and Marceline, were reached by CADIS. Here too, the results were considerable, with 204 patients receiving free medicines and medical tests; 400 food kits were distributed, as well as materials and basic necessities.
In addition, CADIS started an important fundraising campaign to face the emergency, thanks above all to the precious support of the Camillian Delegation of USA and the German Camillian Province (Missionswerk der Kamillianer e.V.) which, together with many private donors, immediately responded to the request of mobilitation for Haiti.
It is our duty, Father Robert Daudier reminds us, to make our support felt by all the survivors to help them overcome this difficult moment by helping them to understand that they are not alone and no longer abandoned. Now that the time of emergency and first intervention is over, we need to think about how to help some poor families to rebuild a small house; how to help some schools to have a space to open classes for the education of children after this difficult moment. It is necessary to set up psycho-social activities in particular in the most affected areas and in the long term to serve as a therapy for the population affected by the earthquake.
Help, in this case of emergency, can always make a difference; and this is why the emergency fund in favor of CADIS is always open, through a spontaneous contribution or through the 5XMille on the "Donate Now" section of the website (https://www.cadisinternational.org/en ).
Share: