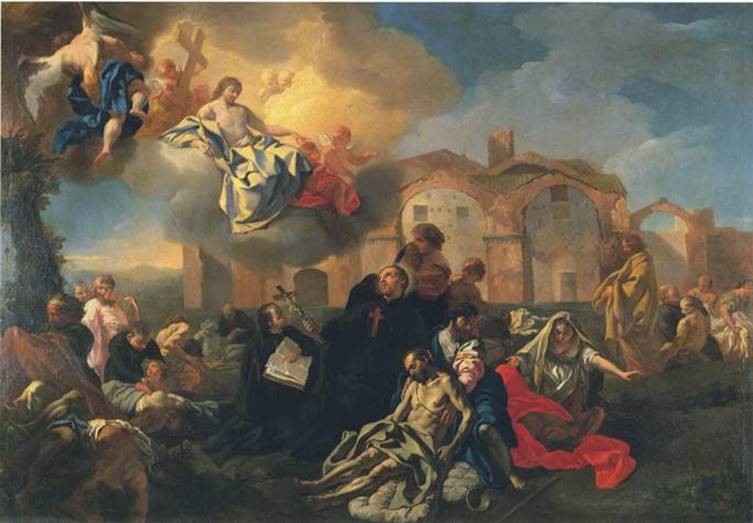 A CALL TO COMMEMORATE THE FEAST OF THE MARTYRS OF CHARITY
May 16th, 2018

On February 2, 1994, the Order of the Ministers of the Sick (Camillians) had officially instituted May 25 as the Day of the Camillian Religious Martyrs of Charity. The day also commemorates the birth of St. Camillus de Lellis.

The Day of the Camillian Religious Martyrs of Charity is a commemoration of the more than 300 Camillians (seminarians, oblates, novices, brothers and priests) who died in serving the victims of plagues in Italy, Spain, Hungary and Croatia during the first four centuries of the life of the Order. This is an exemplary witnessing of the “fourth vow of the Camillians,” that is, service to the sick even at the risk of one’s life.

During the plagues, the Order of the Ministers of the Infirm gave ample and touching proof of their capabilities, skills, and readiness to serve the victims open and conscious to the risk it entails. “In such exceptional circumstances, the community began to appreciate how well the fourth vow had prepared its members for the task ahead. Indeed, starting with the major superiors who were the first to offer their services to those suffering from the plague, the members competed with the other to be the first to be chosen and sent to where the needs and dangers were greatest.” (E. Spogli, p. 208). The fourth vow serves as the guiding star and source of joy and great satisfaction to their vocation.

Of the more than 300 martyrs of charity, only 252 of them have names on the record with the corresponding circumstances of their deaths, the places where they served and the type of plague that contaminated them. All the others remained anonymous for the reason of particular difficulty in gathering facts and evidence due to the tragic condition when the event happened. (Cf. F. Ruffini).

We remember Father Pietro Pelliccioni from Milan who entered the Camillian Order in 1595. Father Pietro twice became the provincial superior and nominated as general consultor and secretary general of the Order. In fact, Camillus has indicated him to be the successor of Father Oppertis as general superior, but he renounced it several times. He went to Genoa to look after the Spanish soldiers who had been quarantined due to a highly contagious type of typhoid. In a few months, Father Pietro was contaminated with the disease and died at the age of 46 in 1625. We also remember Brother Giacomo Giacopetti who met Camillus and the Camillians while doing an internship in medicine and surgery at the Holy Spirit Hospital. He joined the Camillians in 1612 and chose brotherhood as a way witnessing the Camillian charism. In 1630, he worked at the leprosarium and later assigned to Genoa (Pammatone Hospital) where he demonstrated his ability to care for the sick “like a mother caring for her only sick child.” He was then nominated to the General Council. When a plague struck Genoa, he asked to be freed from his duty and went back to Genoa to serve the plague victims. In 1657, he was contaminated with the disease that caused his death on July 14 at the age of 65. We remember Onofrio de Lellis, the nephew of Camillus, a novice who died in 1606 while assisting the sick at the Holy Annunciation Hospital of Naples.

Among those who died offering their lives in service to the plague-stricken people, beginning with St. Camillus de Lellis, eleven of them were provincial superiors, five general consultors, and several local superiors. They manifest their great conviction and fidelity to our charism in times of plagues and wars to the fourth vow, which became an exemplary testimony of these leaders that made the rest of the members inspired to follow their footsteps. They kept the last testimony of St. Camillus at his deathbed: "[…] being called to serve the sick is a precious gift, a talent which must unfailingly be put to good use.” (Cf. Last Letter of St. Camillus).

The very purpose of celebrating this Day, re-echoing the official declaration of the General Consulta in 1994, is to remember which means to know, investigate, learn, create a connection, and apply in the present the lessons of the past. In our search for our identity and belongingness, remembrance is an essential aspect. The heroic act, enthusiasm, and readiness of our confreres to accept death in serving the sick have somehow influenced our way of witnessing today. That is why there is a need to nurture it to make our witnessing more credible to the Church and the society.

Secondly, we want to celebrate which means to highlight the values of the real heroic action, of the person, and of a historical event. It highlights the values of solidarity, commitment, generosity, self-denial, fraternal love and an option for the poor. These values run through the “veins and nerves” of our ministry that sustain its vitality, radicalness, and relevance amidst the fast-changing social conditions. Lastly, we want to imitate which means to espouse ourselves to the learnings and values which will help us to live our witnessing of the merciful love of Christ more accurate, relevant and meaningful.

Though the present situation does not guarantee ample opportunities to exercise our fourth vow today as the martyrs of charity did, the invitation to live in fidelity to our fourth vow remains. As Pope Francis says, “Certainly the heroic offering of life, inspired and sustained by charity, expresses a true, complete and exemplary imitation of Christ […].” (Motu Proprio: Maiorem Hac Dilectionem, 2017). Furthermore, “in the life of a Minister of the Sick, the fourth vow is neither an adjunct nor defense. It is a substantive vow. His life, his religious life cannot be concretized without it. It is from this base that the task in hand, even if it has to be pursued to a heroic degree, is to be seen as a total response to the love of God, who has given himself to the Minister.” (E. Spogli)

Given the above exposition, the General Consulta through the Camillian Disaster Service International Foundation (CADIS), the humanitarian organization of the Order, is reminding all the provinces, delegations, and communities to remember, to celebrate and to imitate the Martyrs of Charity every May 25. The commemoration will highlight the special celebration of the Holy Eucharist, novena prayer and the weekly recitation of the prayer in times of disasters. CADIS will send an electronic copy of the liturgical guide.

Another important highlight of this commemoration is the Emergency Fund Campaign. This will allow CADIS and its member organizations to conduct relief intervention at the very onset of an event. From 2005 to 2014, a total of 0.7 million were killed by disasters, and about 1.7 billion people were affected. The top 5 countries that were impacted by the disasters are China, USA, Philippines, India, and Indonesia. (Cf. UNISDR). All these countries have a Camillian mission. Thus, their cries should not be left unheard. CADIS will also provide a separate mechanics of the campaign.